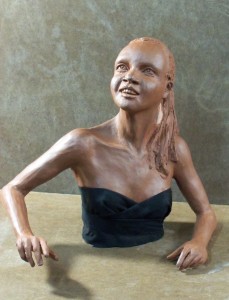 This sculpture is based off of a photo of one of the young artists I had the privilege to work with in Italy.

When I was there in Italy for a couple of weeks visiting with the amazing group of artists who were participating in the three month Incarnate school, we had the opportunity to go up into the surrounding mountains to visit one of the caves which had been used by the Waldensians.  This was a group of people who followed many of the same Reformation ideas about Christianity and salvation as did Martin Luther… only they came at least 100 years before Luther!  They were intensely persecuted (hunted down and killed) by the Roman church at the time, so many of them fled up into the mountains.  They gathered to worship in the many caves which existed up in the mountains there.

We visited one of the caves there, as a time to contemplate and pray.  Kirsty has a wonderful singing voice, but it wasn’t until some time later that the team realized that she had wanted to sing out and worship inside the cave, but for some reason, couldn’t bring herself to overcome the self doubt and other burdens weighing heavily on her shoulders spiritually and emotionally.

A a couple of weeks later, after she spent some time talking with the rest of the staff and working through the emotions and spiritual battles, she was ready to go back.  A small group returned, including Dileep (on saxophone), and a recording tech guy, and Kirsty had the opportunity to sing her heart out in the cave!

What inspired me was the photo of Kirsty emerging from the cave after she had sung. To me, it looks like she is emerging out of so many different levels of darkness, into the light. 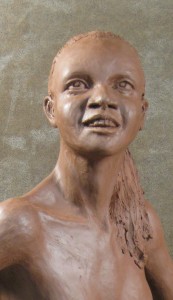