Sometimes, someone makes a comment on a piece you have done which goes deeper than you could have imagined.  It triggers a train of though which makes a significant, or even profound impact on how you look at that piece, your own creative process or even the world around you.

One of my favorite art communities is DeviantArt, and one of my favorite people there is Mariana ( @fadeddreamss ).  I always enjoy the work she does with BJDs (“ball jointed dolls”), both in her intricate paint work on the bodies and faces, and in her photography as she creates stories and personalities around them.  Calling these works a “doll” smacks a little bit like calling the Eiffel Tower a “building”.  😉

I appreciate Mariana not only for her own work, but also for her heart, and the lively, wandering conversations we’ve had about art, both in her work and her reactions to my little “children” here.  We were discussing one of her face-ups when I mentioned this WIP image I had recently posted: 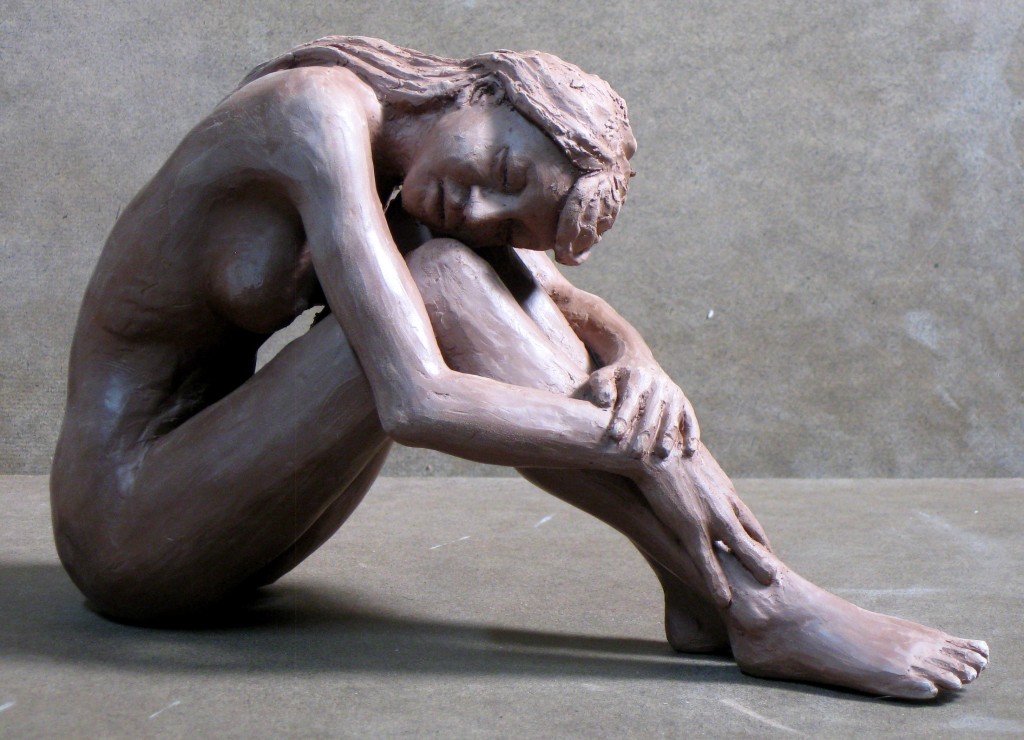 Tomorrow is a New Day

Her comment was, “It’s interesting how it feels alive, I feel like you imagined that sculpt in motion, somehow.”

When I asked her to tell me more, she added:

… the motion feeling might be because I kind of visualized her in my head during the movement of leaning forward to her knees, while sliding her hand down her legs, with a calm sigh. I don’t know, that’s just how I felt the sculpt, which is really amazing, because giving movement to a still figure like this is always so hard.

As I read this, I understood that Mariana was seeing past the instant in time I had captured in this piece, to its movement and flow.

I have been attracted to the figure in sculpture, not only for the beauty of the human form, but for the stories which figurative sculpture tells.  Artists have always used figures in the telling of stories, from ancient myths, to the stories of heroes and  history, to Biblical illustrations.  People are absorbed by these sculptures and paintings and wall carvings, identifying with them and the things they experience.

As visual artists, we capture an instant — in a painting, a photograph, a sculpture.  However, the instant does not exist in isolation.  Rather, it exists as a part of a larger context.  The power of a sculpture, or any piece of visual art for that matter, is in how it enables the viewer to become a part of that context — to its physical, mental, emotional, spiritual flow.

As I thought more about Mariana’s comment, I realized that this has always been under the surface as a part of my creative process.  However, I have to make this a more intentional component of how I work, not only looking at the physical motion of the subject, but the internal journey which the figure is on to take them into this instant in time — the emotion, the thoughts, the friends gained and lost, the burdens of the past, the hope for the future.  For, it is the journey that people understand, connect to, draw encouragement from.  It is the story that brings the art to life, and it is the life of the art that makes it meaningful.