On the first morning after we had arrived in Baja, Hungary, Bill Drake lead the OM Arts team in a short Bible study.  To lay a foundation for our time there in Baja, he spoke from II Corinthians 5 where that apostle Paul speaks of us having a “ministry of reconciliation.”  We are not to preach ourselves, nor the greatness of our beliefs, but rather we are pointing people to be reconciled to God through the sacrifice of Jesus.

Any time I look at a passage in Scripture, I always like to go back a little way and get a “running start”.  No verse in the Bible stands on its own — it is always preceded, and followed by other verses, and is most fully understood in its context.  I went back and started looking at that passage, and over several days, worked all the way back to II Corinthians 3:7.  There, Paul is comparing the “ministry” of the Old Testament Law with the ministry of the Spirit of Christ.  He recounts the story of how Moses, when he came down from Mt. Sinai with the tablets of the Law, had to cover his face with a veil to shield the people from the glory shining from his face because of the time he had spent with God up on the mountain.

Then Paul brings up an interesting point.  The glory of Moses’ face — ie., the glory of the Law which Moses represents — was not permenant.  In fact, the reason that Moses veiled his face was not so much because of the glory itself, but to hide the fact that it was fading away!  Paul uses this to draw a contrast between the fading glory of the Law, which can only condemn us, and the eternal glory of Christ, who actually brings us righteousness and eternal life!

Paul goes on to state:

(14) For to this day the same veil remains when the old covenant is read.  It has not been removed because only in Christ is it taken away.  Even to this day when Moses is read, a veil covers their hearts.

Those verses struck me in the context of our coming to Hungary. Here we were to bring the ministry of reconciliation to these people, but there was a veil over their hearts! No amount of preaching, explaining, pointing, painting, acting, singing or standing on our heads was going to remove that veil. Only Christ could do that.

As I pondered the idea of the veil, I began to pray, asking Christ to show me what the veils were here in Baja.  I started writing down the names of different veils as they came to me in quick succession.  I don’t claim that these are all the veils over the faces of the people of Baja, or of any other town, but I felt the Lord was specifically pointing out these six as things we were to contend with:

The veil of Simple Ignorance:  Sometimes we know people who are ignorant because they close their minds and do not want to know.  However, more often than not, people simply do not know the news of Christ.  They’ve never had someone live the life of Christ in front of them.  They may have heard myths and fables read to them to put them to sleep at night, but the Truth has never reached them.

The veil of Pride:  In particular, I had the feeling that this was the pride of self reliance and tradition; “We can do this on our own, just as we have done for generations!”

The veil of Witchcraft:  This was not “witchcraft” in the sense of spooky old women in black dresses and pointed hats, but the spirit of witchcraft — often manifested in power and control over people through spiritual means.

The veil of Numbness:  This was a bit of a surprise, and I had to pray about this one longer than the others, but then it made perfect sense.  This is the numbness of, “I have been in pain for so long, I don’t even feel it any more.”

The veil of Fear:  Fear is always a veil, but especially in this case I had the sense that it was a fear of change and the unknown.  Not wanting to step off of the path that we have been on for generations.  This veil felt like the flip side of Pride, again pointing to the sense of history and generations of people.

The veil of Secrecy and Shame:  This was perhaps the scariest of all the veils that I felt.  I had a strong sense that this was related in particular to the evil of human trafficking, which is a huge issue in Eastern Europe.  I don’t know to what extent it is an issue in Hungary, but I had a strong sense that it was there.  Much like botulinum toxin, it only takes a tiny bit of this evil to poison an entire population.

I continued to pray about the veils.  Some of them overlapped, but each had its own personality.  However, knowing about evil is all well and good, but it’s not the point of why we were in Hungary for.  Anyone can point out evil — it’s all around us.  Specifically identifying evil is good, but again, it’s pointless unless there is a solution.

But there is a solution.

The solution that I kept coming back to is right there in II Corinthians 3:14-18, which I started to quote above:

(14) … only in Christ is it taken away.  Even to this day when Moses is read, a veil covers their hearts.  But whenever anyone turns to the Lord, the veil is taken away.  Now the Lord is the Spirit, and there the Spirit of the Lord is, there is freedom.  And we, who with unveiled faces [contemplate] the Lord’s glory, are being transformed into his likeness with ever-increasing glory, which comes from the Lord, who is the Spirit.

The veil is the same today as it was in Paul’s day, as is the solution.  Through the redemptive work of Christ, the veil is lifted, and we behold the true Glory of God.  We are transformed from the inside out.  Christ overcomes each of these six veils through His power in the lives of people, as His Glory is reflected from our faces, and into the lives of the people around us.  Imagine a prisoner on death row, being led out with a black hood over his head, and when the hood is pulled away, instead of the execution chamber, he is standing in the middle of an open, brightly lit field, free to go, knowing that his wrongs have not only been forgiven, but paid for by someone else who has died in his place! 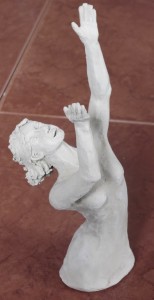 The Veil is Lifted

Now, as an artist, I HAD to respond to this!  Over the nearly three weeks we were there in Hungary, I had an opportunity to do a lot of different expressions of art, from simple teaching of children to individual sculptures to the graffiti wall we did on Friday night.  However this one piece, titled “The Veil is Lifted”, does the most to embody the heart of what we were there to see happen.

Since we had no kiln, I was never able to fire this piece, or any of the others we did while we were there.  However, I was able to leave it there at the Prince Arthur English School, where we were working with pastor Arnold.

When I spoke with the team later, we wondered if there might be a seventh veil.  Not that the number seven has any magical significance, but it is often used in Scripture as symbol of completeness.  More on that later…

(Quotations from the NIV.)
Posted in Blog and tagged mission, sight.