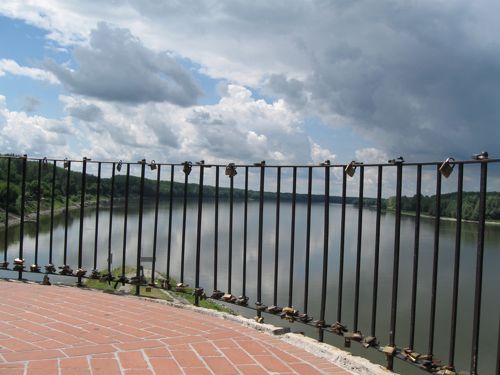 Locks on the River

It’s funny how sometimes God uses something really small to give us a little glimpse into His heart.

At the edge of the city of Baja, on the banks of the Danube, there is a small stone tower. A steep set of steps climbs along the outside of the tower to a small, circular platform at the top. A circular bench is set into the center of the platform where one can sit and gaze out over the river and the forests which line the far bank. It’s a wonderful, quiet place to sit and rest.

What is worthy of note though is the iron railing which runs along the steps and around the platform. According to a tradition, started in Hungary and now spreading to many other cities, a couple will take a lock and engrave their names on it. According to this tradition, if they attach the lock to the railing and then throw the keys into the river, their love will endure forever!

A few of us from the OM Arts team went out to see the locks. I ended up being a little behind the others, so I spent the half hour walk along the edge of the canal approaching the park by myself. As I walked, I couldn’t help but notice the rolling black clouds of a thunderstorm fast approaching from the other side of the river.

Though I could see the lightning flickering in the distance, the storm held off long enough for me to get to the park. To one side of me, I could see bright blue sky, full of sun and hope. To the other, ominous black clouds were approaching fast.

I sat for a little while on the bench, looking at the locks, and it suddenly hit me that I was seeing a picture of life. Every one of those locks represented a couple, a story, a dream, a hope for the future. Like the bright sunshine, they had seen a time of joy and expectation. Some of those dreams were only born yesterday. Some had been there for many years. In the background, however, the storms approached. I wondered how many of those dreams had been broken or crushed by those storms over the years. How many of those dreams had turned into nightmares? How many lived on, struggling against the storm? How many still flourished, bringing life and light to others around them?

What I saw was more than a silly tradition and a bunch of old locks on an iron railing. I saw lives of real people. These are the same people Jesus sees. These are the people Jesus has sent us to, to enter into their stories and reflect His love to them, and tell them there is a Savior who is stronger than tradition, a Savior who commands the winds and the waves. I felt a sense of the urgency of that call.

So, I suppose God can even talk through a bunch of rusty old locks…

Marsha, painting along the Danube

Posted in Blog and tagged mission.