There is a meme on the  Deviant Art web site where I spend a lot of time, called “Draw it Again“.

The idea is simply to take a piece of art (drawing) which you did in the past, and draw it again.  The purpose is to show how you, as an artist, have learned new techniques, become more aware of anatomy, picked up new methods or even new media, gained new insights, and in general, matured as an artist.

This particular piece (Testing the Waters) is a piece which I did in 2012, when I was first starting to get serious about figure sculpture.  I was able to sell the piece to an individual at an art show a couple of years later, so I no longer have the original.  There were a number of elements I really liked about the piece, especially in its balance and the overall flow of the figure, the hair, the towel she is holding and the way her foot is just touching the water.  There were other elements, such as the shoulders, the details in her face/eyes and some of the proportions in her legs, which I was not quite satisfied with.

So, I decided to try this piece again.  I used the same Black Raven clay, and tried to duplicate the majority of the structural elements of the original.  One important difference between the two is the fact that the new sculpture is about 50% bigger than the original — something which I have always found to significantly increase the technical complexity/difficulty of a piece! 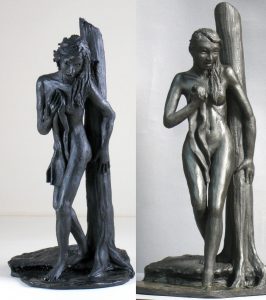 Some of the differences between the two photos are due to the white balance being different (gray vs. white backdrops), and using two very different cameras.

One photo which I used as as a reference for the new figure is “the dust will settle“.

I’ll leave it up to you as the viewer to determine what you think about the differences. 😉