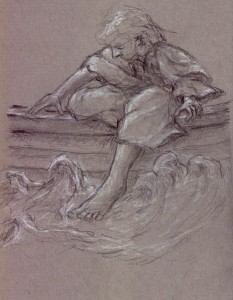 Just Get Out of the Boat

A couple of days before Easter two years ago, I was attending our Thursday morning devotions at the OM USA headquarters in Georgia.  The person leading that morning put up a short video talking about the story of Jesus walking across the water to the disciples as they were struggling against the wind and waves.

When the disciples saw Jesus, they were terrified, thinking it was a ghost.  They had been fighting the wind and waves all night long, and now they were beginning to be afraid for their lives in the storm.  The water was stinging in their eyes, it’s really not terribly surprising that they assumed it was a ghost!

The video described how Jesus immediately told them, “It is I!  Do not to lose courage.”  I don’t know what the other disciples were thinking, but Peter was the one crazy enough to call back, “If it really is you Lord, then tell me to come to you on the water.”

The part of the story we always seem to remember is that Peter did get out of the boat and start walking toward Jesus, but as he saw the wind and waves around him, he started to panic and sink. Jesus had to reach out to him and pull him up. When they stepped into the boat, the wind immediately died down.

However, if we focus on Peter’s mistake, on his “little faith”, and the fact that Jesus had to rescue him when he failed to keep his eyes on Jesus and began to sink, we can miss the critical fact of the courage and faith which Peter must have had in order to take that first step.

As I was listening, a picture burned in my head of Peter, leaning over the edge of the boat, one foot in the water.  Looking at the blank sketch book page in front of me, I could almost see the image there.  The waves are hitting the boat and the wind is tearing at his cloak, but he is taking that step.

Perhaps the reason why this image hit me so strongly was that God was speaking into my heart through this image.

Over the past five or six years, God has been fanning the flame of the artistic gifts which he sparked in me back when I was in elementary school.  I have taken a 40 year side trip through the fields of computers and technology — a trip which God has blessed in countless ways — but now, He is bringing me back to the beginning.  He is showing me that this gift of creativity and art was not just a nice hobby, something to entertain myself and others, but that He can speak His love and grace and character through the visual arts. He has been cultivating this gift in me since the beginning, for His purpose.  Now, He is calling me to take the step to walk away from what is comfortable and familiar (IT and computers), and into what only He can do (working full time in the arts).

So, when we do get out of the boat, what happens? 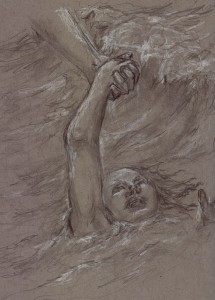 A Hand to Grab On To

Peter found the courage to respond to Jesus and step out of the boat.  Then he remembered where he was and got scared.  More likely than not, when we look around us and remember where we are, we’ll start sinking just like Peter did.  Maybe not as quickly, but sooner or later, we are going to find ourselves overwhelmed, frightened, unsure of what to do next, trying to “figure things out” on our own.  Sooner or later, we will start to sink.

What did Jesus do?  Matthew says, “immediately, Jesus reached out his hand and caught him.”  Jesus didn’t let Peter sink for more than an instant — just long enough to realize that he was not doing this in his own.

What Jesus says next is interesting.  “You of little faith.  Why did you doubt?”  When I first saw this, I thought it was a little cruel on Jesus’ part, to say how little Peter’s faith was, but then I considered the others in the boat.  Peter might have had just a little faith, but even a little faith, a “mustard seed” of faith, was more than none at all!  Peter experienced that moment of clarity and courage and faith, and took the step out of the boat. Even when he stumbled and started to sink, Peter knew where he was going, and who called him.

So, the question is, where is God asking you to, “Just get out of the boat“?