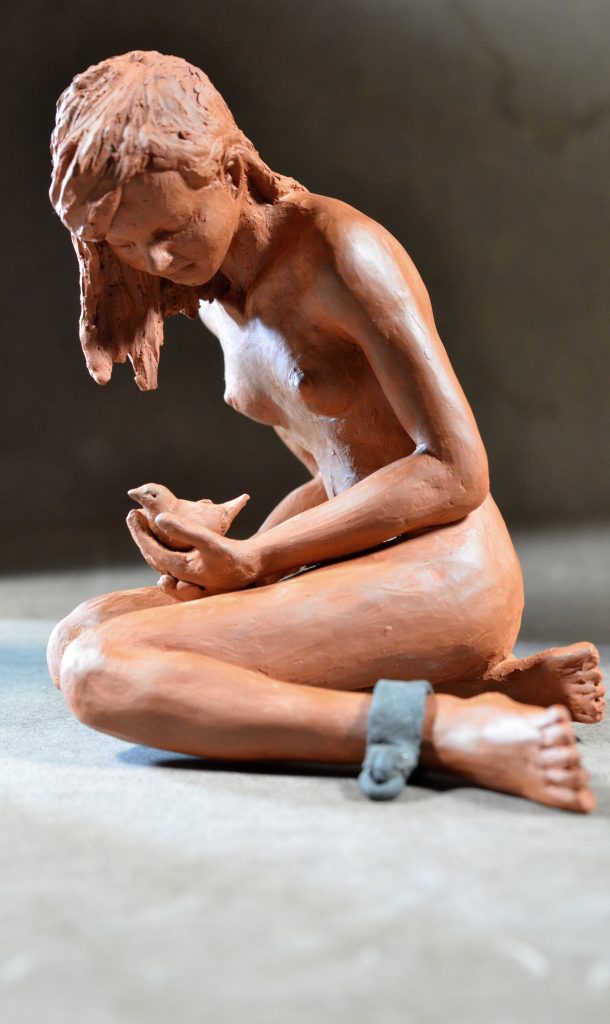 He sees the Sparrow

Are not two sparrows sold for a penny? Yet not one of them will fall to the ground outside your Father’s care. And even the very hairs of your head are all numbered. So don’t be afraid; you are worth more than many sparrows.

There are times when you hear a story, see an image or experience some work of art, and somehow, it leaves you forever changed.  Some years ago, I read an article written by an individual who was working among women who were trapped in the sex trade.  Beaten, abused and treated like property to be bought and sold, this person was working to bring value, love, dignity and freedom to these victims.  There was a drawing along with the article, of a young woman on the ground, with her wrist zip-tied to her ankle.  I will never forget the way that image shattered my world.

This piece is my attempt to respond to that illustration, to the story of the young woman it portrayed and to the issue of human trafficking and the modern slave trade behind it.

It was also inspired by the song, “Sparrow”, written by Abbey Sellers, which she released in October.  The song is available on Amazon, but you can also see the music video on Youtube.

I work with a number of people who are part of the Freedom Challenge, which works to raise funds and awareness to combat the oppression and enslavement of women and children all around the world.