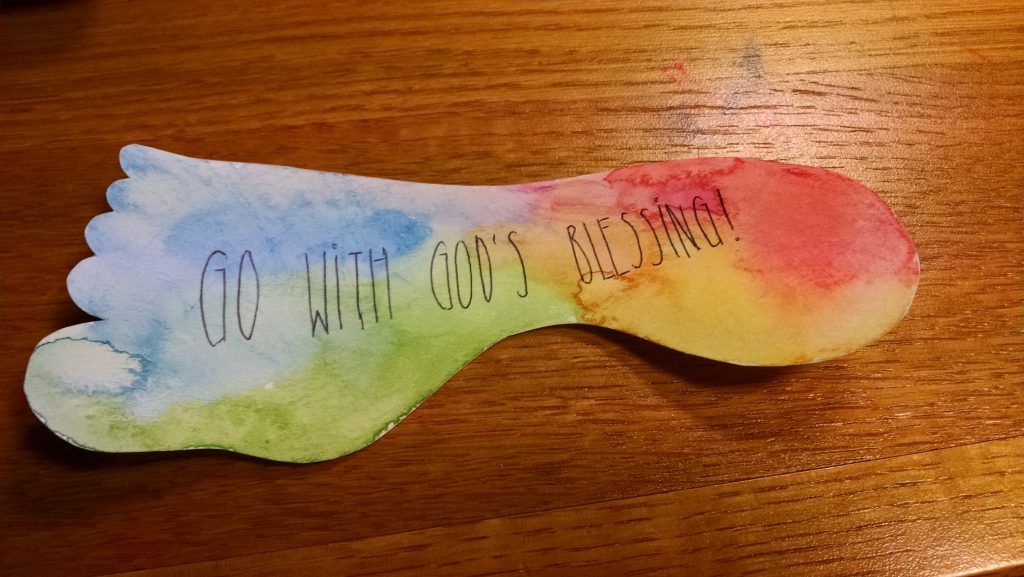 One of the things which particularly impressed me during my stay in Italy with the Incarnate 2016 school was the heart of the Italian staff at the Centro Evalgelico.  The center was built around 50 years ago, outside the small town of Isola (or more properly, Isola del Gran Sasso d’Italia — “The island of the Great Rock of Italy”) as an Evangelical retreat center.  Their biggest ministry is hosting summertime kids camps, reaching out to children and teens throughout that area.

OM Arts arranged for us to stay at the center for the full three months of the program.  What I found astonishing though, was the way the Italian staff there quickly adopted us as “family”.  In turn, the Incarnate staff and students welcomed the Italian staff into our community.  While Italian staff didn’t attend the regular teaching sessions, they participated in many of our worship times, Communion services, came in to the studios to create their own art with us (especially in the visual arts studio), and generally spent lots of time hanging out with us during meals and free time. While language was difficult, we still found creative ways to communicate.  As they worked to take care of us at the center — cooking, cleaning, taking care of the grounds, even sweeping the stairs — we were left with the sense that they served with the heart of Christ. 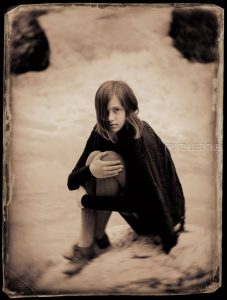 I don’t think it would be fair to try to name any one of the staff as a “favorite”, since each of them contributed to our lives in their own unique way, but there was one young lady who was particularly special.  Hannah was actually from Germany, but she was working at the center along with the other Italians.  “Lovely and shy as a doe,” as photographer Fritz Liedtke put it, she loved spending time with us.  She was actually quite the artist herself, and would quietly come into the visual arts studio at times to work along side of us on her own paintings and drawings.  Often, as we would be hurrying from one session to another during the day, I would pass Hannah in the hallway, or as she was sweeping the stairs or working one of the meals in the dining room.  She never failed to have her beautiful, sensitive smile.

This was a difficult time for Hannah, as the health of her grandfather back in Germany took a sudden down turn.  She was able to travel back to her home in Germany, in time to say her goodbyes to her grandfather before he passed away.  She shed plenty of tears over the coming weeks, but I was glad that we–both the Incarnate and Centro Evalgelico staff–were able to come around her.  I was especially glad that, as I finally found some free time during the last “debrief” week of Incarnate to do some sculpture classes with a few of the students and staff, Hannah was able to come for a little extended time to talk and create together. 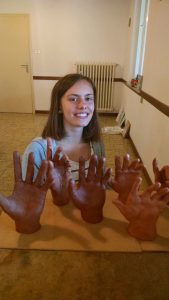 Hannah and the sculptures

As you might imagine, saying goodbye, not only to the Incarnate students and staff we had spent these three intense months with, but to the staff at the center, was a difficult and tear filled couple of days, full of hugs, little creative notes and cards, letters of thanks and appreciation, promises to keep in touch…  The little “foot” note from Hannah (pictured above) was particularly touching for me.  It was just another reminder of how deeply Hannah felt and thought about the world around her.  The footprint, with its rainbow of color, is a beautiful metaphor for our ongoing journey.  Even as each of the students step out into their individual journeys, and the center staff goes back to their continued ministry to the churches and young people which they host there, the Father is the One who keeps us close, in a community which spans the globe.

Blessings to you, Hannah, as you continue to spread Light and Grace to the people around you!