You may remember some of the stories from my trip with OM Arts to the city of Baja in southern Hungary in 2011. I wanted to share a story with you which I just heard a couple of weeks ago – one which speaks about the lasting impact of our short trip there.

On that trip, one of our main objectives was to create a large scale piece of art which would be a part of the final concert in the main town square of Baja. The message we sensed from God was how He takes our brokenness and transforms it into beauty. He doesn’t always “fix” things in our lives, but He takes those broken pieces and transforms them into something beautiful. The word we found in Hungarian which best communicated this transformation was, “Csodálatos“, which means full of wonder and beauty and awe, and has the sense of birth and new life. We decided to do the piece as a “graffiti wall”, on a 5′ by 12′ canvas. 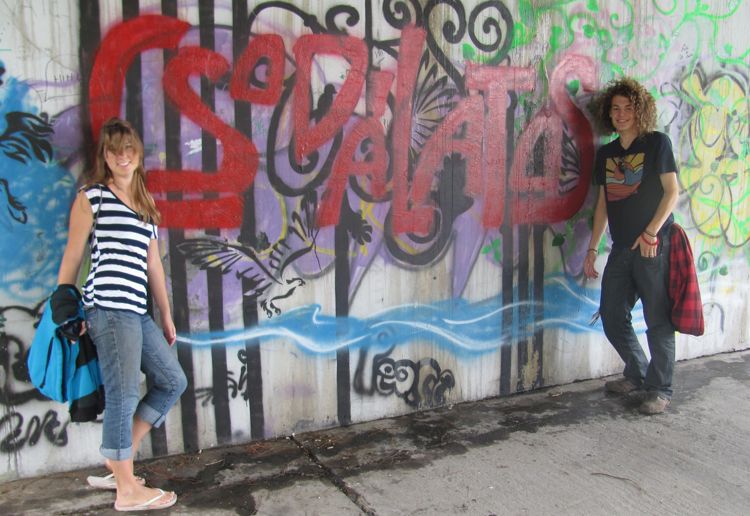 After we presented this piece live on stage for the concert, the local pastor we were working under in Baja had a strong sense that God wasn’t finished with this word for his city. There was a particular bridge over the river which runs through Baja which was well known as an “evil” area, a place for drug use, drinking and other activities. The pastor’s vision was to bring the Spirit of God into that place through our art. So, that evening, we took our stencils and spray paint and went to the walkway which passed under the bridge. After spraying over some of the obscenities there, we proceeded to put up the same graffiti art we had done at the concert, along with the Scripture from John 7:38 – “He who believes in Me, as the Scripture said, ‘From his innermost being will flow rivers of living water.'”

Since that time, I have always wondered about that bridge, and whether or not our work there had had a lasting impact. That’s where the story continues…

A little while ago I received a note from Pat Butler, who led the Hungary outreach. She had just received a message from the pastor:

By the way, the City Manager gave Baja a new theme or slogan that he was inspired to do… He passes under that bridge twice daily… Can u guess? Csodálatos Baja… It’s on all their letterhead and tourist stuff… Makes one think! ps …. Thank U, for that summer together… Irreplaceable!

Looking forward to our next commission from God!

So, more than two years later, the word we left spray-painted on a bridge abutment along a walkway following the river is transforming the city of Baja!

Posted in Blog and tagged purpose.