After more than 35 years of prayer, the Lord blessed Sue and my desire to minister together in the Czech Republic. 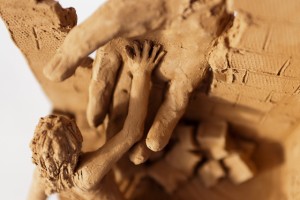 Proclaim Release to the Captives

The outreach was sponsored by a local Russian speaking congregation and its young, energetic pastor. Pastor Oleg and the church had been working on planning this outreach for 1½ years. There were seven of us on the OM Arts team, coming from the US and Canada, ranging from 18 years old, to 50’s. The team was led by Dileep Ratnaike, from OM Arts.In our initial training time when we first arrived in Prague, Pastor Oleg and the OM Czech field leader Pavel gave us an overview of the situation in the Czech Republic. In spite of the rich tradition of Christianity there, and the countless beautiful churches and cathedrals, the spiritual atmosphere is much like it is in the rest of Europe–the “Church” is mostly a dead institution. The Czech people generally distrust (or at best, ignore) the established church as an outdated tradition, symbolizing greed, manipulation, centuries of religious wars, catering to the whims of the rich and influential. Most Czechs believe that God doesn’t exist, or if He does, He’s irrelevant to their day to day lives. Our vision was to “break up the hard ground” spiritually, to relate to people and demonstrate through our lives, and in our case, the integrity of our art, that it was possible to have a real, vibrant relationship with a Living God, without falling into the cold, dead traditions of the institutionalized “Church”. This is one reason why God can speak so powerfully through art, and through our being there in the center of Prague, relating with people and living the Gospel in front of them. 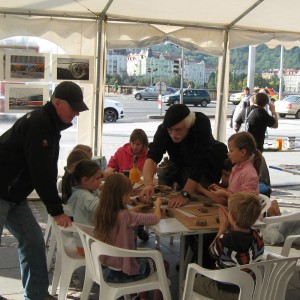 Clay class in the tent in Prague

During the three weeks of the outreach, we stayed in the homes of members of the church. We traveled each day by bus, subway and tram to a square (Palackého náměstí) in Prague, within sight of the Vltava River, and two kilometers from the famous Charles Bridge. Each morning we arrived at the large (30′ × 60′), open tent. After devotions and some training time, we spent the morning working individually, each as God has gifted us, and interacting with the hundreds of people who passed by each day. Some would pause to look at what we were doing, or pick up a Czech Bible or some of the literature displayed around the tent. People from the church joined with us, serving free coffee and tea, passing out literature and interacting with people as they walked by. They also served as interpreters for us, engaging in conversations as people stopped to look at and react to the art we were creating. Over the three weeks, people picked up at least 1,000 Czech New Testaments, in addition to over 8,000 tracts and pieces of literature. Visitors also received an invitation to meetings which the church held there in the evening, with everything from Ukrainian Gospel singers to evangelistic presentations.

In the afternoons, we shifted from focusing on our own art to holding free open workshops, with everything from painting, to drawing to pottery and sculpture to fabric art and “patchwork” (quilting). This was a great time to develop deeper relationships with people through teaching them a bit of art. It was a wonderful time, interacting with everyone from small children to adults. Of course, I had a constant stream of young people who were fascinated with the clay!

Using her faithful little Singer Featherweight, Sue was able to complete a full lap sized quilt, which she called, “Joy in Prague”. Some of the blocks she sewed herself, and some were sewn by people stopping by at the tent, sometimes learning for the first time how to operate a sewing machine! The students added the names of the Fruit of the Spirit across different blocks, using both English and Czech, as well as some of their own names. She also had several smaller projects, such as small pillows or collages, which students could try. Sue had many great opportunities for conversations with people, and was able to spend time praying with several of her students for various needs and concerns in their lives.

My time in the tent was split between mornings listening to the Holy Spirit speaking into my heart, and then trying to reflect that through my work with pottery and sculpture, and afternoons trying to “tread lightly on chaos” in our open workshops. One thing that I have seen over the years – people (and especially children) seem to be less intimidated by clay than they are by other art forms. I had a steady stream of anywhere from 3 to over a dozen excited children, young people and sometimes adults at my “mud table”. It was all I could do to keep up with everyone, from little children who just wanted to play, to people who displayed some considerable skill with clay. With the help of a few simple projects to start from, it was easy to connect with these people, even when we sometimes couldn’t speak more than two or three words of each other’s languages.

One thing I will never forget is my little “shadows”–several young people who would come every day, even before the time for the workshops, and just “hang out” at my table as I would work. With the language barrier, we couldn’t talk much, but that didn’t mean we couldn’t communicate through the simple act of spending time together, learning about clay and art. One of these young people (Eva) unexpectedly met us on the subway on the last Sunday, and tagged along when we went to the English speaking International Church in Prague. I’m not sure how much she understood of the church service, but she said she enjoyed the singing! Pray that whatever she did understand will bring forth eternal fruit!