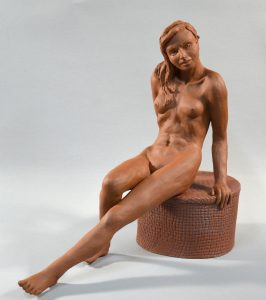 I have spent a great deal of time pondering the process of attaching a title to a piece. I wrote a post some time ago, bemoaning the title of “Untitled” which people sometimes use, and talking about the significance of a title as it becomes an integral part of the work, giving us a window into the intent of the artist as he or she created. I was gently reminded, however, that sometimes “Untitled” is the correct title for a piece of art, as it intentionally leaves a layer of ambiguity, allowing (or forcing) the observer to ask the question of where and how the piece speaks to them as an individual, apart from whatever the artist envisioned.

I still maintain that the title of a piece is an integral part of the work, even if that title is “Untitled”. The process of naming a piece is very much a part of the act of creating art — a part of giving the piece its voice to speak to the observer. The difficulty is in the act of choosing that title, of first figuring out and then putting words around the thoughts and emotions which are wrapped up in your work of creation. 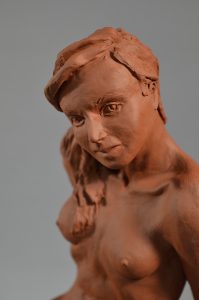 This is exactly the struggle I am going through with my most recent piece, pictured here. This is perhaps the most important figure I have created so far (though, to be fair, I often feel that way about my most recent piece, and will probably go on to create more pieces which are just as important as a part of my own artistic journey), but this is not to say that even I completely understand it. There are some clear elements in this figure: She definitely has a feeling of movement, and the pull in her shoulders as she rises up, perhaps from sleep. She also wears a complex mixture of emotions on her face. She is both vulnerable, and strong in the way she holds herself in the face of whatever she is rising to meet.

I have already gone through several different iterations as I’ve tried to give her a title. My first working title was, “Attitude“, acknowledging that she has a definite, hard edge to the look she gives the observer. She may have a sweet heart, but she isn’t about to put up with anyone pushing her back.

It is interesting how, at the start of the creative process, we sometimes have a very clear picture in our head of what we are trying to accomplish. Sometimes the title itself is the genesis for the process, and the hard work is creating the tangible, visual form to reflect that abstract kernel of an idea. At other times though, there is only a wisp of an idea at the start, or else, whatever clear idea we started with begins to morph and transform as we work with our materials — the development process becoming an ongoing conversation between artist and the artwork.

The figure here followed a process much like this, from the overall pose and motion through her hips, to the subtle line of her eyebrow and turn of her head, to the fall of her hair across her shoulder. Each individual step through the process of execution was deliberate, but not altogether planned in advance. Creating the figure’s face is usually one of my final steps in a sculpture, so the face tends to reflect the emotional and dynamic movement already framed by the rest of the figure. The face says out loud what the rest of the figure is hinting at.

As I stepped back from this finished figure, I tried to put words around what I saw there. One metaphor which I sensed coming to the surface was “sunrise”, with the hope, anticipation and uncertainty of the dawn of a new day. The title which emerged was, “Face to the Rising Sun“. While I think this is closer to the heart of the piece than simply, “Attitude”, it feels too heavy, as if it’s trying too hard to answer the many questions she seems to be asking.

So, I may go through a few more iterations of titles for this figure, or I may even leave it without a title, but in the end, the point is to let her speak for herself, to touch whatever hearts may connect with her attitude, or her strength, the step she seems about to take, or her simple beauty. Her name should leave you room to ask your own questions of her, what she is thinking, how her experience is the same as yours.