One of the things you always wonder about when you go on a trip like this is, what, honestly, are the long term outcomes from all the time (and money) invested in this trip?  Sure, it’s really great to be able to travel, to see other people, to expand our understanding (intellectually and spiritually) of the world outside of our country.  It’s great to see how often the people who go on missions trips come back changed in their understanding of themselves, of God, of the needs of people around the world.
But, are we having a long term impact on the people we are going to minister to?

As we were preparing for the trip this year, one thing I was looking forward to was the opportunity to back and actually see the church and people again, to talk with them, renew friendships, see what they had learned, or perhaps things they were now doing differently because of their experiences from last year.

Was the church going to be different than it was when we last saw them? 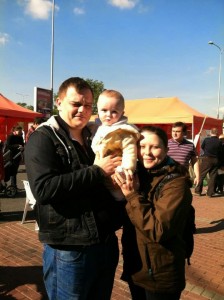 One thing which we had not heard much about after our previous time there was if there were any actual people who had come to put their trust in Christ because of contact with the team (both the artists and the church) during the 2012 OM Arts outreach.  What we discovered was that there were several new individuals and families who had started coming to the church.  One couple in particular was a testimony to the transforming work of Christ.  The wife had been coming to the church, but the husband was definitely not interested.  He was bound to substance abuse, drugs, alcohol, and was selling drugs from their house.

However, he was intrigued by the idea of a bunch of artists coming from America to meet people in the Czech Republic, and agreed to come.  After several conversations with the artists and church team, the Holy Spirit began to work in his heart, and a short time after the outreach, he gave his heart to Jesus.  Since then, he has been freed from his bondage to substances, and has become an active and enthusiastic member of the church there.  Both of them were actively involved in the outreach this year, talking with people and sharing their own story of redemption.

So, not exactly thousands rushing to come forward, but in hard ground like this, it’s real, long term fruit.