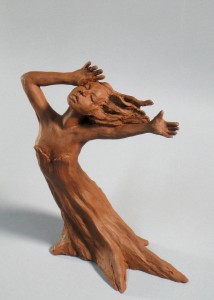 In a previous blog post, I described a sketch I had drawn in response to the “Deeply Rooted” theme our pastor was preaching through at our church.

Several weeks ago, I went on a retreat with our OM Arts team.  We spent four days, bringing together a couple dozen members of our team, some of whom had not had face time together in many months.  We worked together on a number of different activities, exercises, free times, meals and the kinds of things you would usually expect for a team building retreat.  Of course, this meant taking the opportunity to work on several artistic/creative exercises together.

One of more contemplative activities involved spending extended, individual time in prayer and listening, and using our different artistic gifts to respond to whatever it was we felt God was bringing to our attention.

As I began to settle into my own quiet time, a phrase that popped into my head, “I can’t do anything right!”  This surprised me, since I’m not usually the self-doubt ridden sort of person, for whom this kind of response is a constant, nagging whisper in the back of my mind.  However, I did remember a particular incident, not too long before, where several different issues had come piling up on top of each other. I felt like I was under a lot of criticism from without and within, and I finally blurted out in frustration, “I can’t do anything right!”  I kept on praying, thinking that this was more inconsequential spiritual “noise”, but as it kept sticking there, I decided to give it some space and explore a little deeper.

Independently, I had been pondering the image of the tree which I show here.  I’d been working on it in the back of my mind for some time, though it didn’t have a title yet, or even any definite thoughts about what it expressed.  I’ve always been fascinated with CS. Lewis’ descriptions of the talking trees or dryads in his Chronicles of Narnia stories.  However, as I began to turn over both the image and this particular phrase, the two began to connect.

I realized that the tree doesn’t spend time worrying about how to grow, or how to produce fruit.  It’s in the nature of the tree, in its DNA. As long as the tree remains deeply rooted, the growth comes as a result of the way it is created — the design buried in the code, deep within every one of its cells.  Even in the storms, or times of drought, the changing of the seasons from winter to spring to fall, the tree grows and produces its fruit.

God reminded me that, In Christ, I have been transformed into His likeness.  I may not physically look the same as Jesus did when He walked through the streets of Jerusalem, but I have His character, His spiritual “DNA”, inside of me.  As DNA expresses itself in a multitude of different ways in different cells throughout our bodies, each of us expresses Christ’s nature in different ways as we grow, but we all flow out of the same source; we grow from the same roots.

My roots go deep when I live day by day, in friendship with Christ, when I know His words, when I reflect the light within me, when I let more of myself die out and more of Him blossom.  In many different and practical ways, that nature inside of me begins to produce fruit.