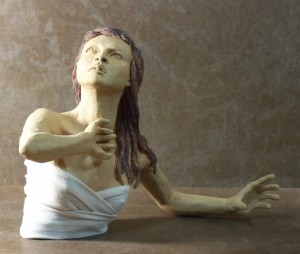 Between Hope and Fear

Hope only exists in the presence of fear, uncertainty or despair.  A muscle is only strengthened when it is working against some opposing force, so Hope becomes the place where we go to when we are threatened.  The threat need not be huge or catastrophic, but it must be something that forces us to pause, and look into the darkness of the future, and imagine that there is still a light there, even if we cannot see it from our current vantage point.

As is often the case, this piece began much more simply, as I was trying to create a softer, more feminine face, but it grew into another in this series of interacting or struggling with the reality of the situations we are bound to.

I have always loved sculpting the human figure, but I am still weak at creating believable looking clothing/fabric.  When I was working on this sculpture, I was trying to decide how to do some sort of clothing which would work with the rest of the figure.  It occurred to me that I could create a wrap by actually creating the figure without clothing, and then adding the clothing later, using the practice of “mixed media”, using the flexibility and adaptability of real cloth to clothe the figure.

I like the effect, since it draws your eyes back up to the figure’s face 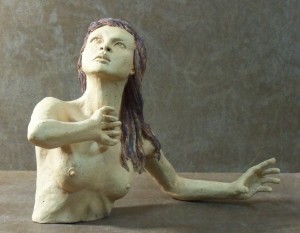 Between Hope and Fear – original