One of my most precious memories of growing up is the time I spent summers at the local art gallery taking pottery classes. In the summer of 2010, I was able to share some of that joy with a group of children in rural Moldova.

Our church went on a missions trip to a small village in Moldova, near the Romanian border.  Our primary goal was to work along side a local pastor and the OM Moldova team in a children’s program for the week. As we considering what else we could do in this program to bless the children and share the love of Jesus with them, I remembered sharing my love of pottery and clay through a couple of classes with the children in our local church, and how much they loved it.  We were unsure of where to get quality pottery clay in Moldova, so we decided to carry the clay along with us. Getting a pair of 50lb boxes of clay on two flights and through customs was, to put it gently, an interesting challenge, but we did eventually get it in. 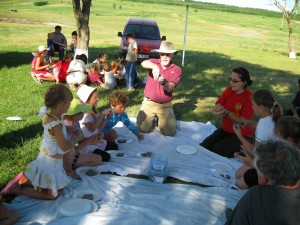 Classroom under the tree

There were around 100 children participating in the program, so rather than try to deal with all of them at once, we split into smaller age-specific groups of around 15 to 20. With help from our Moldovan translators, I was able to teach the children some basic exercises and shapes, and then let them use their imagination to create what they wanted. It was fun to watch the excitement of the children as they were at first frustrated, but then began to get the feel of working with the clay. The pastor was able to borrow a small kiln from a local school, so we were able to fire many of the pieces the children had made to make them more permanent.

The pastor also introduced me to Peter, a local potter, and we spent time sharing together. Since we hadn’t used up all of the clay with the children, I was able to give a 25lb block to Peter to bless him and his work. The OM Moldova team was then able to take another block of clay with them a couple of weeks later to a similar children’s program at a church in another small village. The pastor’s wife there is an artist herself, and was very appreciative of the clay, since she found it difficult to obtain quality clay there locally. 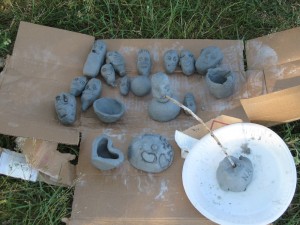 I would like to return at some point with the team to the village in Moldova. One of my dreams is to take a smaller group of some of the older children and spend some some more concentrated time with them, to see them get beyond simply making a shape to the point where they can express a little of themselves in their creation. After all, the oldest Potter in the world is God Himself. He formed Adam “out of the dust of the earth”, and made Adam “in His own image.” He has passed that same spirit of creativity and expression on to us, if we take the time to discover it.